Have you ever laid something down temporarily, then found that you actually like it there? Such was this frame on my trunk. 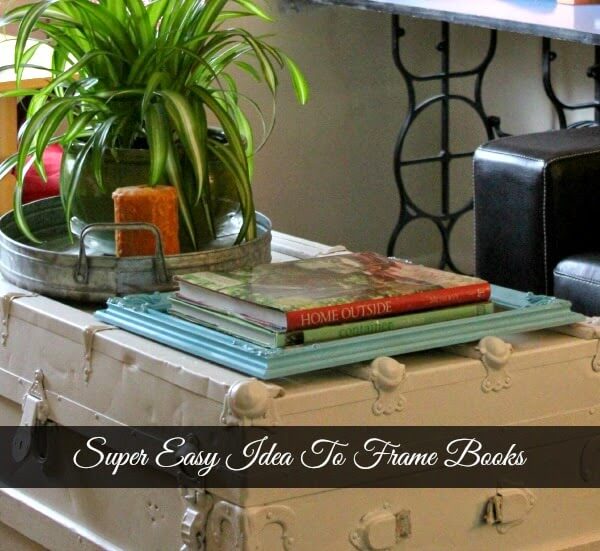 I didn’t plan to leave it there. I just didn’t have time to find a place for this pretty frame. And then after a few days, I found that I liked it there.


There are all kinds of little frugal tips to decorate and accessorize your home, if only you think outside the box. 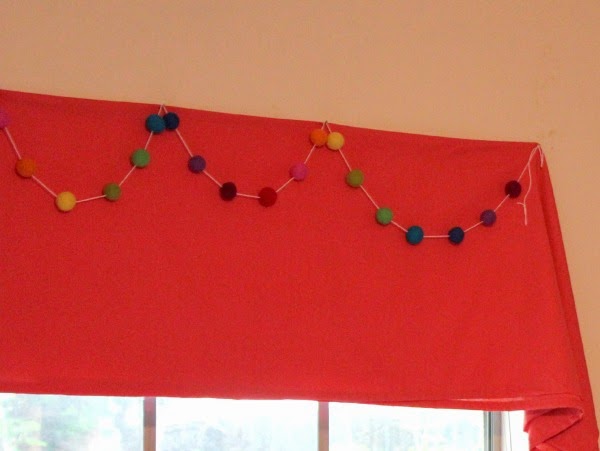 I’m sure many of you would think this idea a bit tacky. But I don’t have the tools and the wherewithal to put a drapery rod over the window in my bedroom. So what did I do?
I picked up a very cheap bed sheet from Walmart. (I think it was $6). I folded it into thirds, ironed it, then simply nailed it up. Then I strung a pom-pom garland across the nails. Yes, nails are a bit tacky I know.

And this is my window treatment, such as it is. 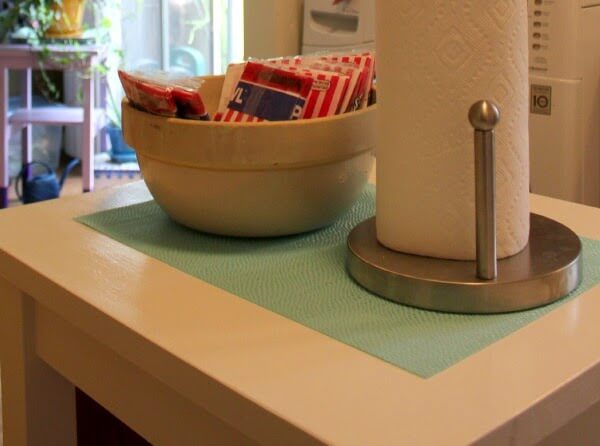 Have an old bowl somewhere stuffed back in the nether regions of your cabinets? Bring it out and put it on display. I put this one on my kitchen island and put popcorn packets in it.
It’s super close to the microwave, so I just grab one, take off the plastic wrapping, and pop it in.
I liked the added bit of color this place mat gave to the white island.

Maybe you don’t have adequate storage in your teeny tiny bathroom. Use what you have. What I had was a basket and an old box. I nailed them up on the wall and they serve as storage. 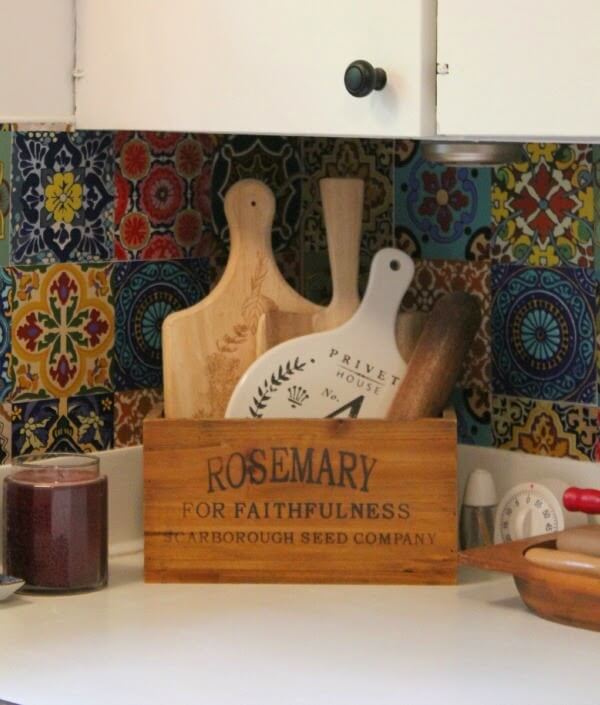 Try corralling your cutting boards in a box on your kitchen counter. It looks organized and tidy. 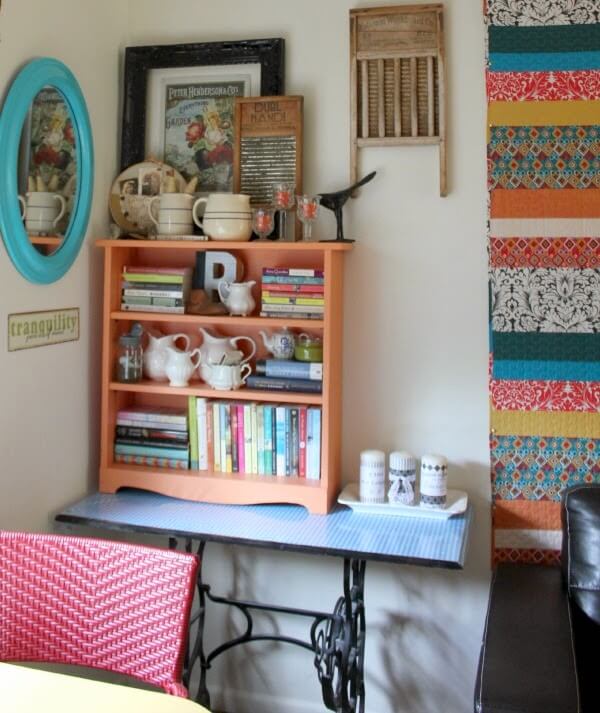 I’ve been debating for weeks what color to paint my sewing machine table you see here. I knew it would have to sit quite awhile, plus have a protective coating, before I could put my peachy shelf back on it.
So I took the easy way out. I had scraps of oil cloth that I simply placed under the shelf instead. Easy peasy solution and I didn’t have to paint. 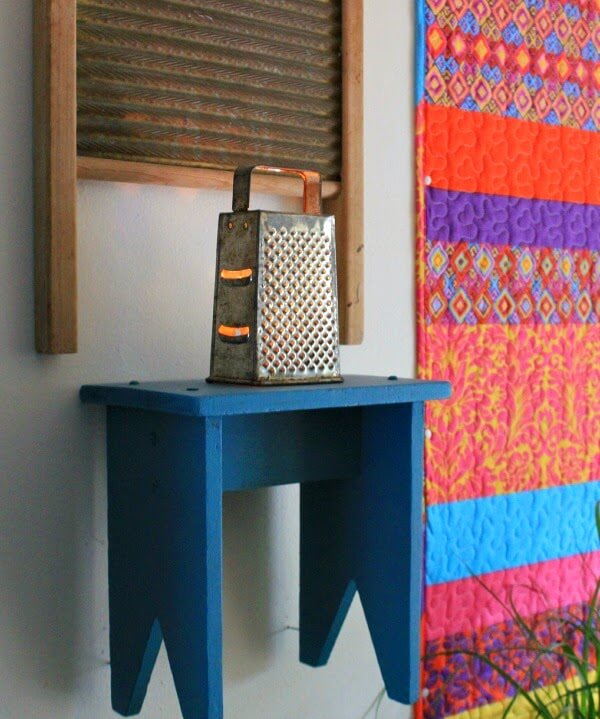 I couldn’t figure out what to do with this cheese shredder. So I coupled it with this tiny little blue bench.

I put those cheap brackets on the back of the little bitty bench to attach it to the wall. Then I placed a small jar with a candle in it underneath the cheese grater.
I like the way the candlelight glows through the grater. 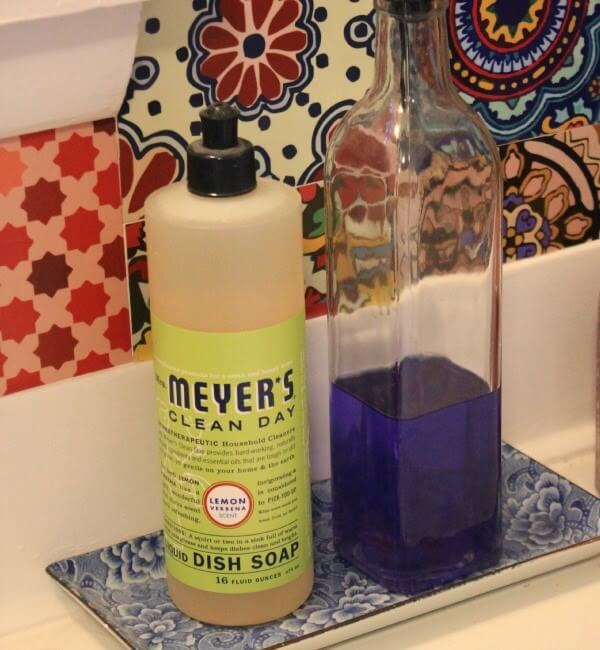 Instead of merely putting your dish soap next to the sink, do it with a little style. I used a pretty little ceramic tray to hold the soap, and it elevates this little area to look a bit more special. 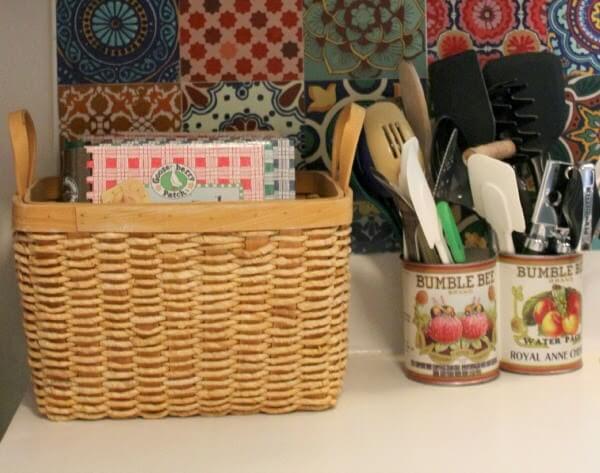 I don’t have a ton of cookbooks. So I put them in a basket on the counter. Easy to get to. And the basket adds texture to the space.
I picked up these two cans that were already attached together long ago and put my manual can opener and scissors and such in them.
But it would be super easy to take cans, cover them in scrapbook paper, and hot glue them together for the same effect.
There are so many ways to decorate your home with what you already have.