Well, I did not do the conventional things most of you probably did on Christmas Eve and Christmas, but I’ve never been quoted as being conventional anyway. I celebrated the holidays by painting my walls.

Why bright white? Because it is what I had, what I had painted the kitchen cabinets with some months ago. And I don’t like to waste paint.

The only thing in its proper place this morning when I woke up was my coffee station. No way was I not having my coffee! 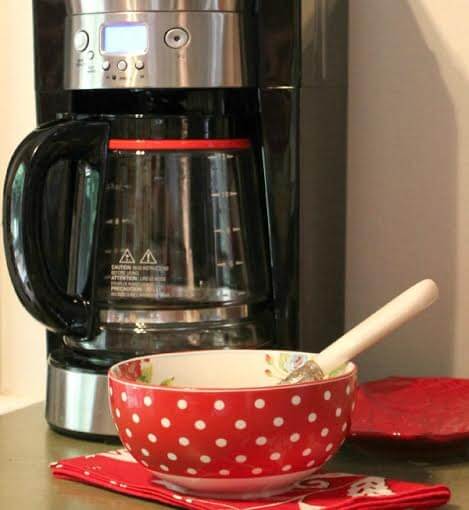 I had to make a run to Ace down the road to get another gallon of bright white paint 30 minutes before they were to close on Christmas Eve.

And why did I suddenly decide to do all this? Well, I tend to make lots of “last minute” decisions! I’m not much of a planner.

I love my new and much bigger kitchen cart, and I really needed the storage. Here’s where the painting came into play.

Once the cart was in place, then I of course had to decorate the walls around it. I would put up one thing, leave it a bit, decide I didn’t like it, and take it down.

This resulted in many nail holes and much frustration. Until finally I just took everything down and grabbed the paint can and brush and went to town.

But as you know, when you paint walls bright white and the walls that adjoin it are an off-white, the off-white looks dirty. So that led to my painting the living room, and that led to the dining area.

And if someone tells you you can use those Command strips to put something on the wall, beware. I put those clip boards up above my desk with the printed out printables clipped to them. But when I took them off the wall, I took part of the wall with it.

I either didn’t use the right kind, or my walls didn’t like them.

So now I’m trying to repair that. It is the only area not painted. There are about five or six big patches that I have to fill. Joy, joy.

Next up is trying to find something besides my fingernails to clean up the many white drips of paint I ended up with on the floor. I’m not known as a neat painter.

No matter what I do, I end up with it in all the wrong places. And so far I’ve been using my fingernails to scrape it up, which are quickly getting sawed down. And this method will probably take me weeks.

There are a lot of drips, though, yes, I laid down broken down cardboard boxes and taped the floor underneath the walls I was painting. Why this never works for me I don’t know.

I remember my second husband once said: “Whatever you do, stay away from paint.” Well, you see how well I listened to that advice.

So today the pupsters and I are back in the bedroom, because every other space is a big mess.

I rather like my white walls, now that it took my entire holiday to get them there. And I’m going to be more careful about what I nail into them.

And that’s not the only reason. I just want less clutter overall. I am craving white space. So I don’t want every conceivable spot covered with something.

My bedroom has the two quilts on the wall. And everything will stay the same in there. I simply don’t have it in me to begin taking down everything and painting in there.

And I like the bedroom the way it is, so off-white walls it shall be. There is a hallway that separates the bedroom from the rest of the rooms, so the paint change is not really noticeable.

I did cook a delicious crock pot roast yesterday that cooked away while I worked. Everything was such a mess I didn’t even bother to cook anything else. I had put potatoes and carrots in it and it was so good I didn’t feel the need for anything else.

For the first time I used one of those crock pot bags you insert inside for less mess, and I believe I will now do this every time. No muss, no fuss! Just take it out and toss it!

So I still have facing me some spots in the wall, and we’re talking oh, six inch spots, that I’m working on filling. Rome wasn’t built in a day. And then painting that section.

I’m moving pretty slow today because of course I completely overdid it and my ankle is begging me to slow down. Whether I start putting things back today is up for grabs. Probably not.

Abi is being clingy because I wasn’t sitting next to her the past few days, and she whined and carried on and let me know about it.

She is on the mend. But she still hasn’t forgotten my feeding her by hand that icky canned food the day after surgery, and now she won’t eat unless I keep doing it. Which means feeding Charlie by hand as well.

Abi is…Abi. And there’s apparently no changing her.

So I hope you all had a wonderful and “conventional” Christmas with all the trimmings, if that floats your boat

Photos to come when things are back in place. I have no idea what it is I’m going to do yet, so it will be a surprise for me too!