You are perfectly fine until something catches your eye. And then everything changes in the space of a few seconds.

This morning I got up, ate yogurt, and headed to the Walmart Market. I hadn’t bought groceries in several weeks and I needed to fill the pantry.

Driving home I decided to drive through McDonalds.

Several blocks away I sat at a traffic light. I glanced over and in the car next to me was an older man and a big floppy eared dog.

The dog sat in the passenger seat, still and perfectly behaved, just like a person. At one point the dog looked over at me.

I could not take my eyes off this old beat up car with the man and the dog. It made me think about Abi.

The man reached over and patted the dog on the head and I burst into tears. That was all it took.

So I drove through McDonalds with my sun glasses on pretending I was fine. I cried all the way home. I got myself together enough to come inside because I knew it would upset Charlie to see me that way.

It is things like this that make up the pathway of our grief. The path doesn’t seem to lead anywhere. It meanders over hills and down into valleys. We have no control over it whatsoever.

I’m crying now just thinking about that man and his dog.

The old man obviously was poor, that much was evident. But with his dog by his side, he was rich in companionship, for a dog is loyal forever.

They might have been sitting in a car that wasn’t far from the car cemetery, but they had one another. And that is enough.

Grief is hard during the holidays. This is my first Christmas without Abi.

What I would give to be in that man’s shoes today. Driving down the street with Abi in the passenger seat, patting her on the head at the traffic light. 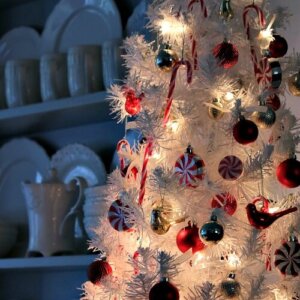 What If You Want To Spend The Holidays Alone?