You may have noticed that the blog looks a bit different. Found this logo on Etsy, purchased it, and had the logo designer insert my blog title. I thought the house with flowers was appropriate.

The image boxes below the header are empty right now. I haven’t had time to configure them.

I also did something a little different in my kitchen. Nothing much. I just shifted my big wood cart on rollers to the other wall. That wall has just a tad more room.

My wall shelves above are filled with a little bit of everything right now. Food plus household cleaners. I need to sort them out.

My purple sweet potato vine is tucked over there by the settee. It may need more sun but where I had it was just too much sun. So I’ll monitor that.

Last year it nearly burned up and it was over by the door.

Ivy on the table. In the next photo you’ll see her mid yawn, which makes her look a bit dotty. Or feral possibly.

Ivy is a bit dotty at times. Right now she’s sleeping behind my recliner. Which is now what she does during most of the day unless she’s eating or exploring.

Cats seem to be nocturnal creatures.

Charlie just had his boiled egg and Ivy a bit of wet cat food.

Then later Charlie gets his prescription canned food and Ivy gets another tablespoon of her food. They both have dry food if they get hungry in between.

Last night I watched a couple more episodes of “Safe“ on Netflix.

Is the main character, (think his name is Michael Hall) who I will always think of as Dexter from that other show, using an accent? Because on Dexter he clearly used an American voice.

At first that put me off, but then I really got into the plot and now I’m anxious to see all the loose threads get tied up. I think I have maybe 3 more episodes until it’s over.

Sorry I don’t have more today. The critters are calling my name. 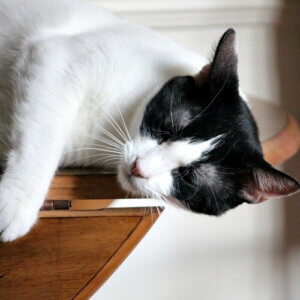