Charlie and I headed to his acupuncture appointment and got there at 7:30. I thought we’d be alone in the building at that time. But others quickly started coming in. At least by that then we were in a room.

She treated him today for his back and lungs. I gave him a Trazadone pill last night and again this morning. Still he shook and knocked a bunch of the needles out. I don’t think I gave it to him in time for him to feel that much less anxious.

The acupuncture vet said she’s going through the same thing with her dog and just started it on Trazadone too.

We did get more sleep last night, thank goodness. I don’t think he’s wanting to go out to go to the bathroom. I think he’s just got his days and nights confused.

Yesterday I explained to the vet what he was doing and if he’d thought it was related to his kidneys, he would have run more tests because Charlie tends to get urinary tract infections.

But last week all his blood work came back normal. And the vet said his heart and his lungs sounded fine too.

I’m hoping the Trazadone will help with his restlessness.

This morning I had to call Nathan to come open the door to the air conditioning unit because the filter light was blinking. The door is real troublesome due to the hardware put between the door and the outside of the door.

This latch was put on by the company that came to put in insulation. I don’t know why they put that crazy latch on the outside.

Sometimes I can get it open myself. And sometimes I can’t. If I can, and the door to the maintenance shed is unlocked, I’ll just go in there and get a new filter myself. But this time I couldn’t open it.

So Nathan came and got the door opened and changed the filter. Then he was standing in the living room telling me how a big tree limb fell on his vegetable/flower garden he has in front of his apartment.

It busted his favorite terra cotta pot that I gave him and some of his plants.

Anyway about that time we hear all this rustling. I said: “Ivy didn’t get inside that door did she?”

So he goes over and Ivy is pushing on the other side of the door making it harder for him to get it open. She was completely panicked and it’s a very small space. He gets it open and she comes flying out and ran straight behind my chair.

Poor Ivy. She can’t help herself. She’s what I call a “nosy noodle.” But she has to check out everything and gets herself shut up inside places and closets. Currently I just leave the closet doors open so I don’t have to worry about it.

Last night I came through the living room and Charlie followed me and he saw Ivy laying in my recliner. He went over and got on his hind legs and reached out to her. So I put him up there with her.

He didn’t want to stay, but I thought it was a touching moment.

Thank you for all your well wishes and concern about Charlie yesterday. Meant a lot to me. 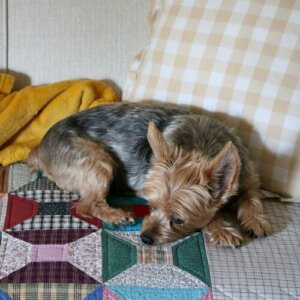 Charlie’s Hurried Trip To The Vet