Yesterday I went around the corner and bought canine CBD drops for Charlie. My vet suggested it. We can’t seem to get him relaxed at night with the Trazadone, and I was desperate for sleep.

I paid $60 for canine drops in chicken/beef flavor, which I’ve been putting on his food at the recommended dose.

He might have slept a bit more last night. At least I think I got a little more sleep. I think he just enjoys being outside and it’s cooler at night. During the day I can only let him out to do his business because the heat is hard on his heart.

I’ve tried the CBD capsules before to see if I could get my nerve pain under control, but had kind of a bad experience. Instead of calming the nerves down, it ramped them up with pain.

The woman I bought the canine drops from yesterday asked if I would like to try the oil on my wrist, and I thought, well, maybe the other time was a fluke.

It wasn’t. Within a minute I was in their bathroom scrubbing it off with soap and water.

Everyone I talk to tells me how CBD oil helps them. It does the opposite for me. Wherever the nerve goes the pain follows when I apply the oil, like I’m having alcohol or something poured into the nerve.

Monday at 7:30 a.m. I take Charlie to the animal acupuncturist. He has been walking better. It’s expensive, but what are you going to do? You love your pet, you’re going to do whatever it takes to make them feel better. This will be his fourth visit.

My daughter and son-in-law had a dog that they paid to have chemo. You do what you have to do.

Nathan told me that one of the residents has a relative or friend who is a family attorney and he will be using her with his Texas custody case. Apparently they will let him work off the fees. So I’m glad for that.

I remember being young and poor. Seemed like you’d get through one thing just to have something else instantly crop up. Especially if you have kids.

His best bet at this point is to not have any more kids because he’s having a hell of a time paying for the three boys he has. And I haven’t been shy about telling him that.

I still haven’t found out how to protect my patio plants. Yesterday I looked at the thermometer outside and it was 110 in the shade. I’ll find a shade sail online, then read that you can’t use it except in areas that don’t have much wind.

Well, Oklahoma has a lot of wind. I don’t want to pay for something that quickly gets shredded by those strong winds.

I only had my gazebo, which I paid $300 for, for one year before the wind made mincemeat out of it.

When I moved here in 2014 there was a tree in each corner of my yard bordering on the alley. But they were problematic in all kinds of ways and finally came down a few years ago. So now my patio is mostly sun.

About 3-4 days ago I was sitting in my recliner and started the mechanism to bring up the foot rest. Somehow my right foot (yeah, the bad ankle one) got caught under the glass of the coffee table.

It took a few seconds to stop the chair. Meanwhile the top of my foot was being pushed down. So my ankle is a bit sore from that. After that I moved the coffee table farther out. I don’t want to trip over it walking through my living room, but neither do I want to crush my foot.

I have the recliner close to the couch, as you can see above, so Charlie can bridge the gap and go from one spot to another.

He has doggy steps to go up to the couch, but then he might decide he wants to be next to me, which is typical, and this way he can just walk across.

The seeds I ordered arrived, but it’s just too hot to think about planting right now. Going to hold off a bit.

Dottie, a reader, sent me English mint wrapped in newspaper in the mail. As soon as it got here yesterday I took it outside and put it in a bucket I filled with water to revive the mint.

It’s still in water today. It needs to recover from its journey here to me.

I’ve been watching Seven Seconds on Netflix. I believe I’ve watched 3 episodes so have 7 to go. I love Netflix! 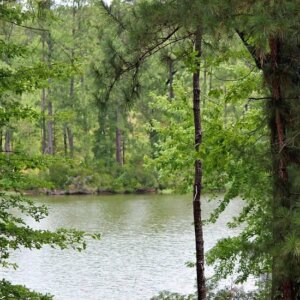