Yesterday evening I was warming a bowl of beans in the microwave and toasting two pieces of wheat bread in the Breville oven. I had tuna ready in a bowl to make a sandwich.

While my food was getting ready I stood at the kitchen sink and washed up the pet’s dishes after their meal.

After I turned off the water I saw something moving out of the corner of my left eye.

Well, I thought, that’s not something you see every day. A loaf of bread moving.

I fully turned around and faced the kitchen cart that holds my Breville oven and coffee maker.

The remainder of the loaf of bread was slowly moving across the surface of the kitchen cart. I watched for a few seconds and then walked around to the end.

There was one of Ivy’s big paws on the other side pulling the end of the bread sack. She almost had it. Until I stepped in and moved it out of her reach.

Her eyes were round and innocent.

What would have happened if a few more seconds had passed and she’d pulled the remainder of the loaf of bread to the floor? Would it have ended up in the bath tub? In her red toy box?

She’d just eaten. And somehow I can’t see her eating big pieces of bread. But then you never know.

Ivy is such a mischief maker. She’s sweet and endearing and smart as a whip. And she’s full of feisty fun.

Such was the mystery of the moving loaf of bread.

Now here’s an entirely different scenario. This is sweet Charlie in his usual spot in my chair.

While his cat sister is looking for things to get into, Charlie just waits for his mama to get back in the chair with him.

Just another day with Ivy and Charlie. 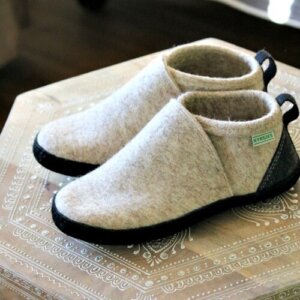 Kyrgies Slippers & How To Safely Switch Your Cat’s Food