You are here: Home / Life / Fresh Veggies, A Book & Getting The Correct Diagnosis

I’ve been having lots of cherry tomatoes to eat lately. And the peppers are really starting to produce now.

I’m just waiting for those crisp cucumbers that taste so good in a tossed salad.

I think I may take these to Kendra. She says her garden has produced lots of veggies too. But she doesn’t have cherry tomatoes or this variety of pepper.

When I open the French door and stand on the small step looking out, I see zinnias at various heights. They look like school children in a classroom, hands held high, anxious to answer a teacher’s question.

Some stand straight and tall, unwavering in the heat. Others bow down as if to royalty, with curved stalks and flowers turned downward.

What I love about zinnias is how long they last. They look pretty longer than petunias or daisies or most any other flower. They bring a lot of bang for one’s buck.

They’re also helping to shade my vegetables from the heat.

I just finished a book, “The Woman In The Window”, an intense psychological thriller by A.J. Finn. It’s about a woman with agoraphobia.

Agoraphobia is an anxiety disorder that can be triggered by a number of different irrational fears (phobias). Such as the fear of: being a victim of violent crime or a terrorist attack if you leave your house. Or becoming infected by a serious illness if you visit crowded places.

Of course the last one isn’t unrealistic at this point in time with the coronavirus raging.

I read about the author at the back of the book and it was quite interesting.

On the author’s birthday in 2015, before he began writing this book, he was diagnosed with bipolar disorder. He was so relieved to finally have a diagnosis. Instead of it being the beginning of a journey, A.J. Finn says it was the end of one.

He had struggled for more than 15 years with severe depression which had affected all areas of his life. He had tried every treatment imaginable: medication, meditation, talk therapy, hypnotherapy, and even electro-convulsive therapy.

Then his diagnosis was corrected (bipolar disorder) and a new drug regimen was prescribed. A month and a half later he felt transformed, or at least significantly improved.

Then he began writing up an outline for “The Woman In The Window.” And the rest, as they say, is history.

The same type of thing happened to me, but it took many more years to figure out. Since my twenties, I had been given all kinds of diagnoses. One was bipolar disorder, but the lithium did nothing.

Then it was a variety of other things and finally just anxiety disorder and depression. I was prescribed many different types of medication over the years.

It wasn’t until my fifties that I was given the Asperger’s diagnosis. Which was a game changer.

Once you know what’s truly going on, you begin to understand why you do the things you do and then you can go about trying to deal with it.

I still take medication, but now I’m more content because I’m not flailing about trying to understand why I don’t do so well socially. Why I like to be alone and why noises bother me so much. Why I have such sensory problems, etc.

I’m no longer apologizing for not being at family holidays when lots of people are gathered. When there’s more than one conversation going on I hear them all. I can’t seem to filter the others out and hear one. Which leads to confusion and anxiety.

I’ve dropped Charlie off for his acupuncture appointment, so I’ll be going to pick up my little man soon. 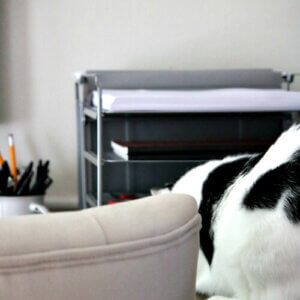