Since it was so humid outside this morning and the air fogged up my camera lens, I decided to walk around indoors and take photos.

I wanted to show you the new quilted throw I ordered from Amazon that I put over the back of my couch.

I’ve nearly ordered this throw half a dozen times and then for whatever reason didn’t. Finally I ordered it and it came yesterday.

One gets tired of looking at the same thing all day every day.

Because of the coronavirus I only leave my apartment a few times a month.

Oops. Looks like I need to clean the mirror. It never seems to look streaked until I take a photo of it.

Many of my house plants are spending the summer outdoors. Some have gotten pretty big being out in all that humidity.

I still have these in the tub in the living room and four more plants in the bedroom.

A few weeks ago I brought this red cupboard from my bedroom here to the living room.

It’s been back there for a few years. But I didn’t have much I put in it. So it came in here to spend some time.

I actually put dish towels in it since I never use the kitchen drawers.

Years ago I found mouse droppings in the drawers and that was it for me. I haven’t seen signs of a mouse in probably four years.

But that’s still stuck in my memory, the vision of my clean dish towels residing with mouse droppings.

Those drawers will never be used again because that’s just how I am.

Those are Ivy’s toys you see at the bottom of the above photo. And they are used often because Ivy always seems to have a toy.

About once a day I walk around and pick them up and put them back in the red bin.

Gift From A Reader:

A reader gave me this leaf she made. Isn’t it beautiful?

She came here from Texas about a year or so ago to pick up dishes I said I’d give her.

There’s Charlie on the couch.

He’s waiting for me to sit down in the chair so he can sit next to me. He always waits on the couch till I’m finished doing whatever I’m doing.

And here’s my little dining space with the $10 table and the outdoor chairs purchased from Pier 1 I bought way back in Texas.

I like outdoor chairs because they’re so durable. And if you need to clean them, you can just take them outside and hose them down.

I guess Pier 1 has gone out of business. I can still recall the first Pier 1 I ever visited. It was in Norman, Oklahoma where I raised my kids.

I thought it was so exotic with the world-themed decor I rarely saw anywhere else. And the air was filled with the scent of whatever incense they were burning.

Trends Of The Past:

Back then it was popular to hang flat baskets on the wall. Do you remember that?

And if I recall correctly, the only furniture Pier 1 carried back then was wicker and rattan.

I think they got too expensive. Sometimes I would go in, before Covid of course, and walk around in the Pier 1 here. But I very rarely purchased anything.

Still, I hated to see them go out of business.

Last night I fixed another pan of cornbread and had a little leftover roasted chicken I defrosted. I also ate cornbread stuffing, three bean salad, and sliced veggies.

I added a sliced pepper to the stuffing just because I had it on hand.

And I also gave Ivy a few cornbread crumbs and luckily she didn’t throw up again.

When I give one of the babies a treat I have to give one to the other. One or the other will follow me around and won’t let me forget until I do.

Where Are The Birds?

I can’t figure out why I can’t seem to get photos of the cardinal couple outside any more. Well, any birds really.

I wonder if the birds are instinctively staying out of sight because they see Ivy peering out at them?

And there she is, watching for birds.

Ivy gets so excited when she sees the birds.

She gets down on the floor and puts her face up to the panes of glass and thwaps her tail back and forth.

And there’s my Charlie boy with a soft throw. He loves them and often burrows down inside them where no one can see him.

Then that drives Ivy crazy and she digs at him. And that makes him angry. So when she finally uncovers him he snaps at her.

I tell her to leave him alone. But it’s like she can’t help herself.

I hope you enjoyed the little stroll around my little apartment. It isn’t very big. It isn’t fancy or anything, but I love it because I’ve injected my personality and things I love into every room.

Sorry I didn’t make it back to the bedroom. I’ll do that another day. 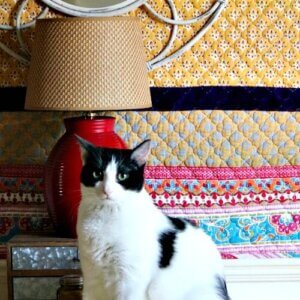