Another hot day ahead. I’ve no plans to go out the door except to water my plants.

I now primarily go to the grocery store twice a month and take Charlie to acupuncture. That’s pretty much it.

I keep moving my outdoor plants around on their caddies to protect them from the searing heat. Thank goodness I bought those caddies this year! They have surely saved my back.

I found out my grandchildren will likely be returning to school soon. Which means their paternal grandparents and I won’t be able to see them.

Their other grandparents have already made this clear to their son, who wants them to return to a normal life.

What people need to understand is that it’s impossible to return to “a normal life.” With a virus this virulent it is the boss and we are not. We have to adjust to the virus because it isn’t going to adjust to us.

The separation is going to be hard for the paternal grandparents because they only live a few blocks from Riley and Marley’s father, who shares custody with Kendra.

Last night I sat down to a supper of beans, potatoes and cornbread. Added to that was beets, a spoon of cranberry sauce, sliced cucumbers and cherry tomatoes.

Ivy likes to sit on the other side of the table and watch me eat.

She never seems very interested in what I’m eating.

But last night cornbread crumbs were getting scattered beyond my plate. And Ivy ate a few crumbs and found that she quite liked cornbread!

I’ve given her tiny bits of my food before. She wasn’t this excited when I gave her tiny bites of chicken.

I couldn’t believe her enthusiasm over the cornbread. She will turn her nose up at bits of meat, but savor cornbread crumbs. What a silly cat.

Maybe Ivy Lou is a vegetarian. 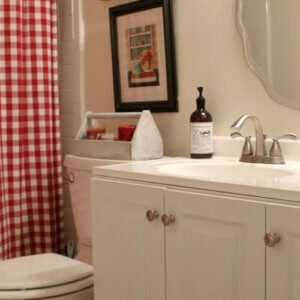 When It’s Time To Clean The Shower Head