I hate to take Charlie out when it’s hot, but that’s when his appointment with the animal acupuncturist was yesterday afternoon. They were running a bit behind due to a few emergencies they had.

While we waited out front I saw several dogs getting therapy. I watched one dog in a big water chamber getting water therapy. Another dog had recently had his back leg amputated and was sleeping between rounds of therapy.

When they got Charlie and me into a room, they used this mechanism that looked kind of like a cell phone. One of them tried to hold him still while the other pointed at his body and moved this over him to see where his hot spots were.

Evidently the hot spots are inflammation.

Then the vet comes in. She is a traditional vet who went back to school to learn all about these alternative treatments. First thing she noticed was that his body was hot, so she told someone to go get a thermometer.

She took his temp and then said his temp is kind of high, has he been acting sick. I told her he’d coughed a bit, but that wasn’t too unusual with his trachea and allergy problems.

So she went ahead and did the acupuncture and checked it again. She told me she was going to call Dr. Poteet, his regular vet, and that I should take him over there.

So I pay that bill and head over there.

Her office told Dr. Poteet that Ms. Pruitt was on her way, but they don’t know me by that name there. That’s because when I first started taking my pets there they knew me by my married name as I’d just gotten divorced.

I’ve pretty much gone back to my maiden name, but about half of my stuff is still under my old married name. That’s because I encountered problems once I got to Oklahoma because I’d never really used my maiden name.

I tell you what. If I had it to do over again I would never have changed my name when I got married. If you get divorced and haven’t had any time to build up credit in your maiden name, it’s like you never existed.

I asked the judge in Texas when I got divorced to please switch my name to my maiden name, and he did. I got my social security card in that name before I moved here in late 2011. Once here I found that I couldn’t open a bank account or get a driver’s license.

All because Brenda Pruitt had only existed the first 20 years of my life, and was nowhere legal on paper.

Anyway my bank account and credit cards are under my married name. Then my health insurance and social security is under my maiden name.

When I go in or call somewhere I have to ask myself who I am known as there or they won’t know me from Adam. My bank has me down with both names because I get my blogging income under the married name.

Oh, how confusing things can quickly get.

Back to Charlie. So I drove him over to Dr. Poteet’s office about 4 miles away. Yes, he had a temp. They ran all kinds of blood tests and couldn’t find a thing wrong with him aside from all his old age ailments they currently treat him for.

Oh, they did find a cyst on his neck, where he’s had them before, and lanced that.

They asked if he’d been upset and I told them when I take him out he’s always upset, even though I hold him close to me and never even put him on a floor.

So we think that’s maybe what it was. He went to a strange place with big dogs walking past him and saw a different vet and had procedures done he wasn’t accustomed to.

And of course you can’t explain all that to a dog. You just have to hope he trusts that you do what you do in his self interest. They can’t verbalize what’s wrong. I just have to guess and hope I make the right determination.

By that time it’s nearly 6 p.m. Charlie and I are both drained. The vet told me to watch him closely the next few days. Naturally this is a long holiday weekend.

So Charlie is set up with a treatment plan at the acupuncture place, which will cost me no telling how much. And it upsets him just to get out of the car and go there.

Plus I hate to take him out in this intense heat because of his heart problem.

In my car he has his soft dog bed in the passenger seat and he’s fine as long as we don’t get out and go in someplace. But my Charlie is a nervous Nellie. Always has been. Abi was the dominant dog and he followed her.

So that’s my long winded story. Today I’m tired and can barely think straight. I had to call the apartment office earlier to put in a work order and I referenced someone named Nick. The manager had no idea who I was talking about.

The manager kept asking me who Nick was and I had not even realized I’d said that name. So I told her I have no idea who Nick is. Don’t know a Nick. Could have been a figment of my imagination. Must have meant Nathan.

The older I get the longer it takes me to recover from anything. Confusion and being upset and worrying about my pets falls under the broad category of anything.

Though Charlie is afraid of so many things, like gnats and bugs and just about anything that moves, he is not afraid of fireworks or thunder.

He barks when he hears either in the distance. But he doesn’t flip out and head under the bed or anything.

I keep my sound machine on when they do the fireworks on the 4th. I do that for both me and Charlie. As a child I was terrified of fireworks due to the noise level. That hasn’t changed.

So we’re hopefully just going to spend quiet time at home the rest of the week. We’ll attempt to stay calm and collected and not get people’s names mixed up.

When I was a kid I remember old folks getting people’s names wrong and I would wonder what on earth was wrong with them. Didn’t they know John from Jacob or Kate from Karen?

Now I don’t have to wonder anymore.

Sometimes when I’m talking to my daughter I’ll be talking about Charlie but refer to him by a dog I had in the past. My daughter will stop me and say: “Mom, you said Teddy.” Or I might have said Bubba or Pepper.

She kind of laughs, but in about twenty years she’ll get it. 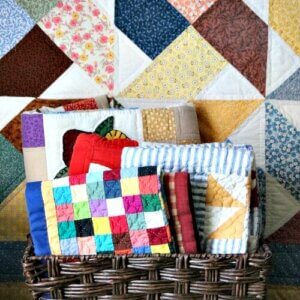