It’s pretty hard to sleep in the morning when you have a cat jumping back and forth either side of your head.

Ivy apparently had cornered a fly and possibly wounded it. It was above my headboard and she couldn’t figure out how to get to it.

Finally I just got up. It was probably just a matter of time before she ended up on my face.

Right now she is rolling around in kitty crack I just gave her on the top level of her castle tower, where she looks out on her world from above.

Kendra was with various contractors in the yard of the flip house yesterday afternoon when a neighbor walked into the back yard where they were working.

She told Kendra she lived in the neighborhood and a friend from out of town wanted to move nearby. The neighbor wanted to know the asking price of the house.

Kendra said she looked around her at the yard all dug up and told her that if she’d come the day before, it would have been about $150,000 cheaper.

What you see in that square will be a new bedroom and bath.

She’s knocking down a wall to make the little kitchen more spacious and I believe several other walls as well.

She always uses one wall in the dining room for her “statement wall,” where she does something a bit different.

I am reading “The Woman In The Window” by A.J. Finn.

It is a psychological thriller about a woman, a psychologist, who has agoraphobia and has become a recluse in her home in New York City. She spends her time watching old movies, drinking wine, and spying on her neighbors with her Nikon camera zoom lens.

Her life has been upended. The plot teases the reader about a traumatic event that culminates in Anna’s downfall. Which led to the temporary closing of her practice and the separation of she and her family when her husband and young daughter moved out.

Then, gazing out her window one night, Anna sees a neighbor she’s just recently met being stabbed. She calls the police. They bring the couple living in the house over to talk to Anna.

But this isn’t the woman Anna met. Jane had sat right here with her a few days ago where they were getting to know one another and playing a game of chess.

These people act like she’s crazy. But she knows she saw Jane getting stabbed. Not this Jane, but the Jane she met previously.

She isn’t imagining this, is she? Is she now in danger as well?

This one is a nail biter and keeps you guessing. I’m about halfway through the book.

I have to take Charlie to acupuncture in a few minutes. 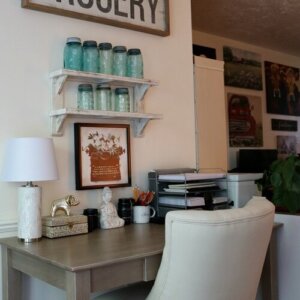 Creating A Half Wall Office Niche