I stood outside in my yard and took photos of what I could see around me. Sure beats the ugly back of the strip mall I use to look at from my old apartment patio.

This is my Japanese Maple and farther out is Barbara’s patio.

Yesterday I saw her daughter bring flowering plants to her patio. That was so sweet of her.

Her mother doesn’t get around that well, but now her patio is beautiful thanks to her daughter.

Such Pretty Scenery All Around Me:

It is so beautiful here. I couldn’t imagine a prettier view from my own patio.

Below is the balcony above Barbara’s patio. I think the woman who lives here is named Shirlene.

I’m not good at remembering all these new names yet.

I see her sitting at her little patio table working on some sort of craft project sometimes.

Shirlene has hung some gorgeous and lush Boston ferns on her balcony.

I can’t imagine climbing the stairs to live up there. But I imagine it’s kind of like living in a treehouse.

Below is a hosta plant in a pot down a ways from my yard.

Here are those purple and white irises I mentioned yesterday. They’ve been blowing in the wind this morning, I noticed when I looked out.

These irises are also outside Barbara’s apartment.

Looks like they’ve been there for a while because the plant is putting out lots of blooms as though it’s well-established.

This is Ron and Pat’s patio that I’ve shown you before.

Though they’re in their late eighties, they sure do get a lot done on their patio. And the birds they feed are never hungry either.

There are often neighbors standing outside talking to them. They’re a very sweet couple.

Sometimes I see Lynn, who lives above them, helping them with their yard.

These Seniors Love Caring For The Birds:

The people who live here are very good to the birds. And consequently, the squirrels.

I dragged my red chair over to talk to Ron and Pat the other day, and you could hear geese somewhere nearby.

If you listen closely you can also hear the funny sounds the squirrels make and the cooing of the mourning doves. Or maybe it’s the owls.

Back To The Ship Yard:

After a bit, Ron will get up from his rocking chair and say he’s “got to get back to the shipyard.” He’s referring to the room where he builds ships.

I need to get over there and see this “shipyard.” Next door neighbor Steve says it’s quite something to behold.

Ron says I can bring my camera and take photos.

This is John’s place just behind my apartment. A winding path of patio stones separates our back yards.

John is very conscientious about his yard. He was looking for a house but told me recently that he’s given that idea up. The real estate market is still too crazy.

And besides, where would he find the kind neighbors we’ve got in this little area?

Boomer, his beloved dog, wouldn’t have Ron sitting on his porch with a container of dog treats waiting for him.

I know Boomer would miss Ron as that’s the first place he runs to when John opens his gate and he runs out. Those treats are mighty tempting.

This is the path I mentioned. It’s rather rustic in nature. You have to be careful walking on it or you’ll stumble.

Looks like the grass needs to be cut. I’m sure the landscapers will be by the first of next week to tend to it.

The maintenance guys have been up on the roofs of the apartments seeing to the air conditioning systems before it gets hot.

So John lives just across from me, and then there’s a woman whose name I’ve forgotten who lives next to him.

I haven’t met her yet. He told me she’d been sick and her daughter has been staying with her for a while as she recovers.

Then there’s Marilyn, who I met last week. She moved in around the time I did.

Before she moved to this apartment, she told me she lived in one of the upstairs apartments. Marilyn said she recently figured it was time to move downstairs, as she’s now in her eighties.

You sure can’t tell her age by looking at her.

I really want to meet and talk to the woman who lives in the fourth apartment close to the pool. You can see part of her fence in the above photo on the left.

She really works outside in her yard a lot and I want to take photos of it.

Here’s one of my red geraniums blooming in the mixed plant I bought on my own patio.

After seeing all of the above, it really makes me itch to do more out there.

And last but certainly not least…

Here’s the view of the couch from my chair, where 17-pound Ivy is taking a nap.

She’s been so playful lately. You know how you can talk baby-talk to a dog and it will run around in circles with excitement?

Well, this morning Ivy was at the top of her newest cat tree. I started saying her name and talking baby talk to her.

And she went crazy up there flipping and flopping around. I was afraid she was going to fall.

But cats seem to lead a charmed life that way. They seldom fall.

So that’s what you see from my point of view this Saturday morning. 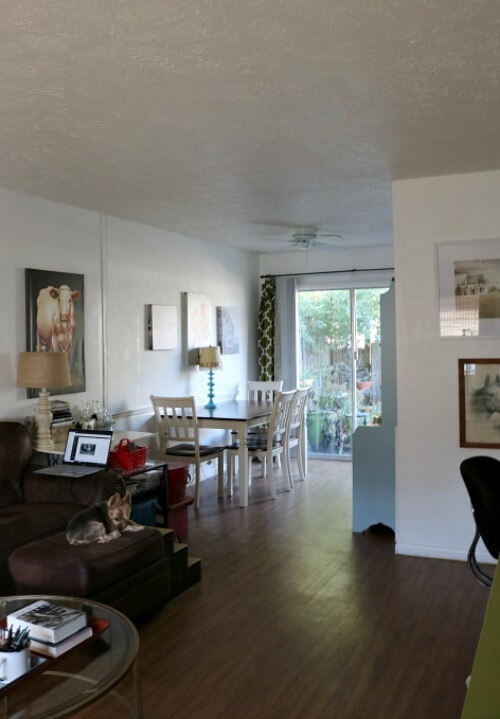 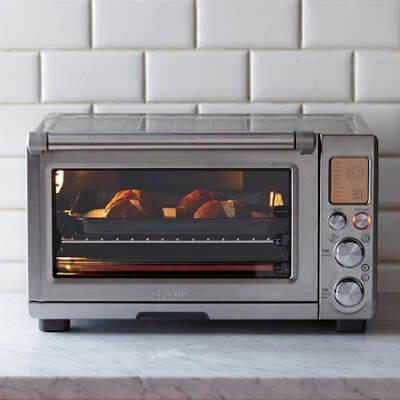 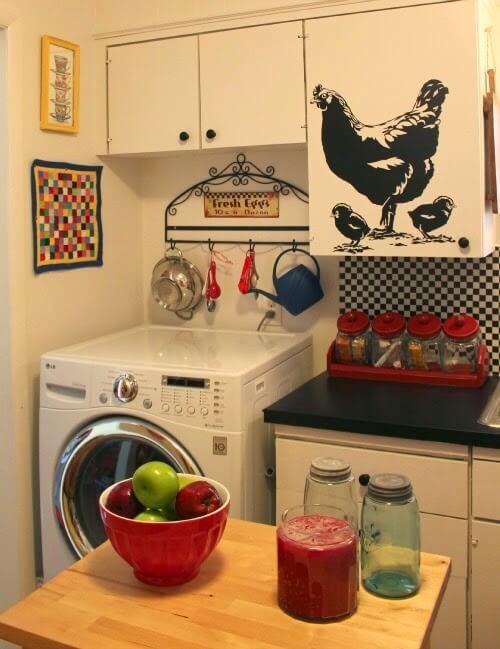 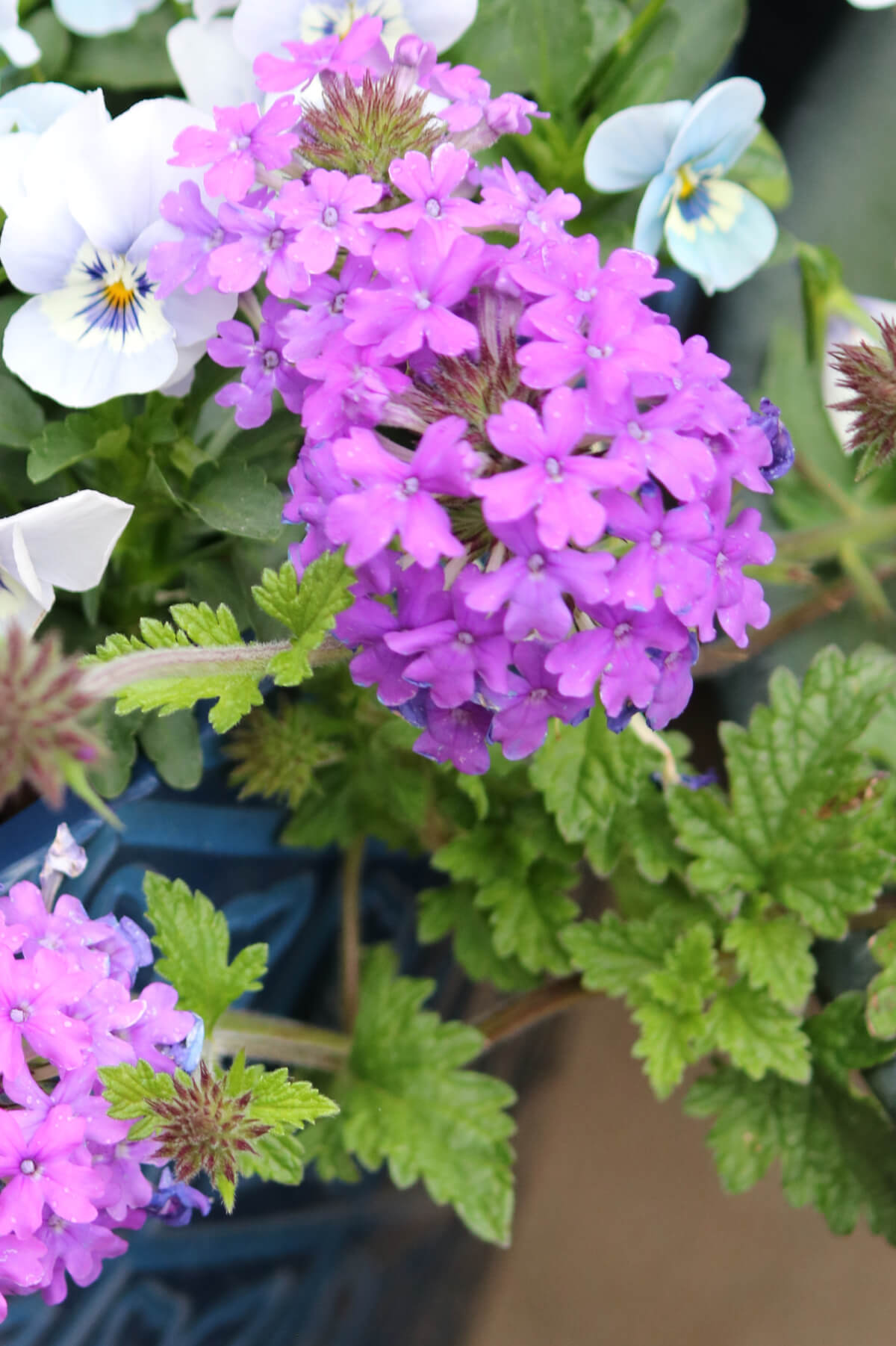 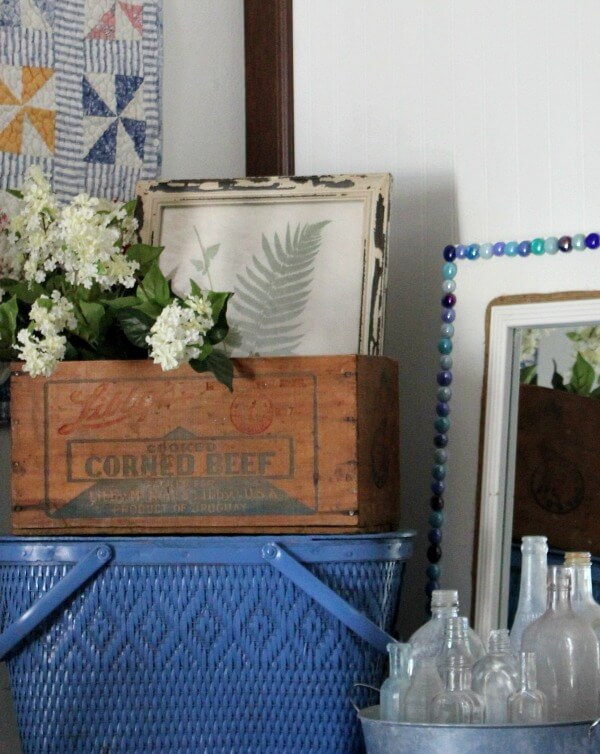 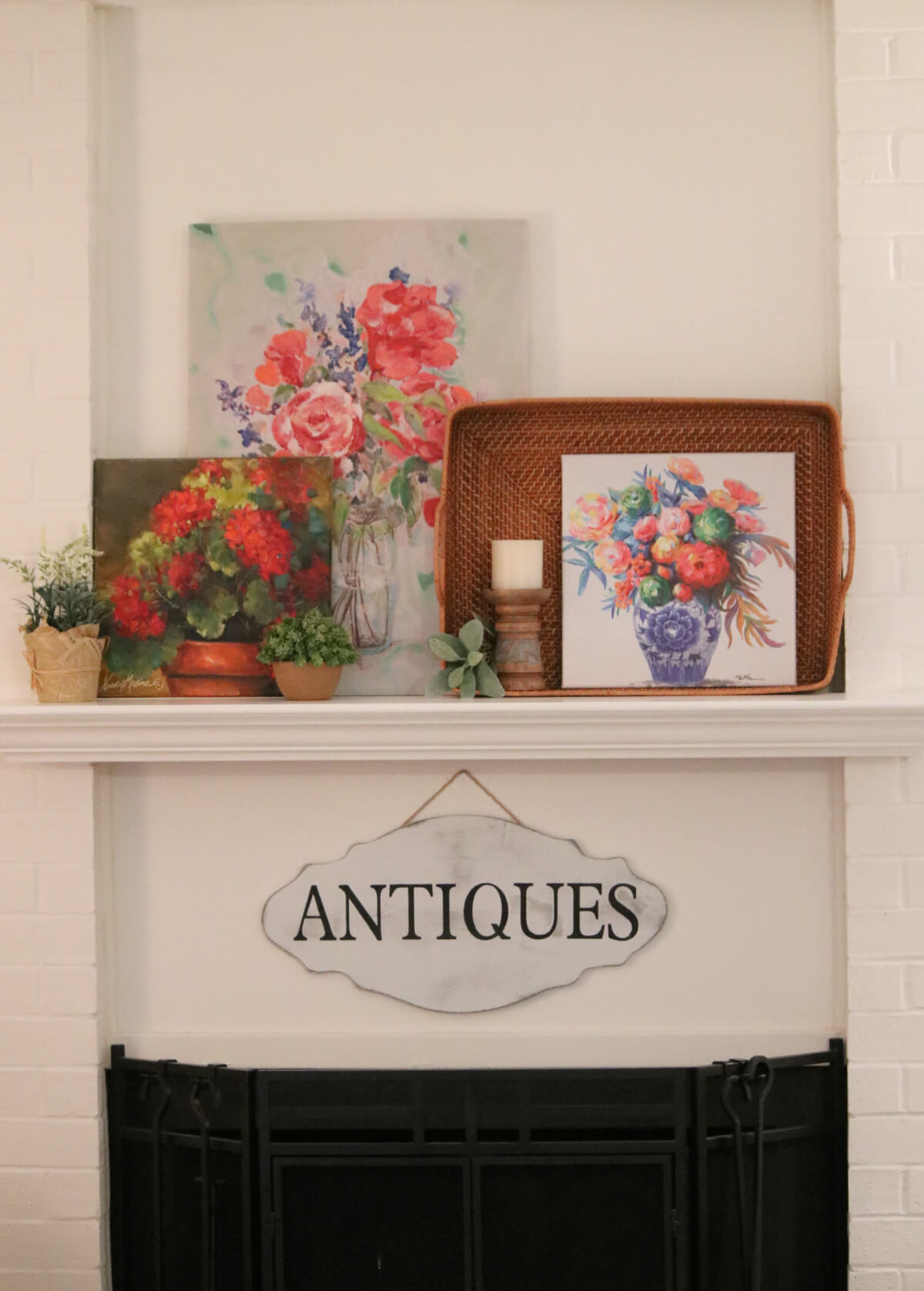