Skip to content
Last night Abi really gave me a scare. It took me a bit to figure out what was going on. It was really a nail biter. 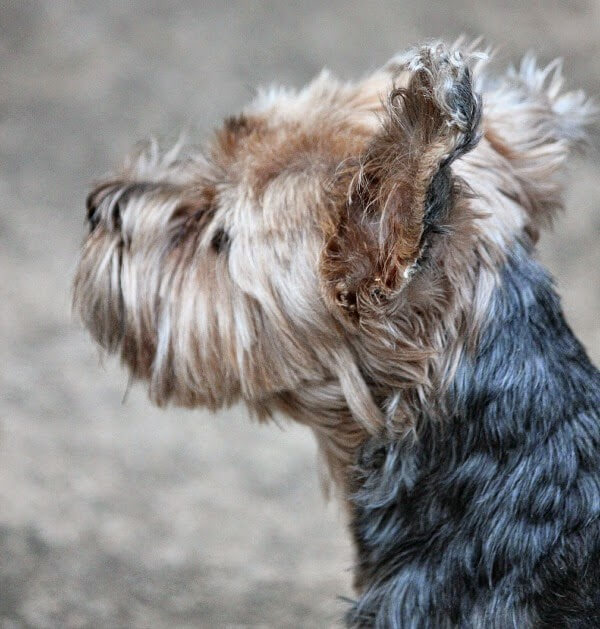 I had noticed that for about an hour, it didn’t seem as though Abi was closing her mouth. She’s such a little toot that I thought maybe she was trying to get my attention with a new “feral look.”

After about an hour, it started to worry me. I reached over and tried to close her mouth. But it wouldn’t budge. And it didn’t seem to me it was her strength holding it open.

I put my finger into her mouth to see if something was in there. Nope.

I brought her a few pieces of kibble and tried to hand feed her. Nope.

Okay, I needed to bring out the heavy artillery. I got a small dessert plate and plopped a spoonful of non-fat cottage cheese on it. Her favorite. And only one of the two people foods she is allowed due to both dogs’ tendency for pancreatitis. The other people food is plain potato.

She wouldn’t touch it. My heart amped up. I put my finger in it and tried to feed it to her. She would put her mouth down to it, but wouldn’t or couldn’t take a bite.

Then she would lay her head down, and push around her mouth with her feet. Which nearly tore me up, watching her trying to fix whatever was wrong. 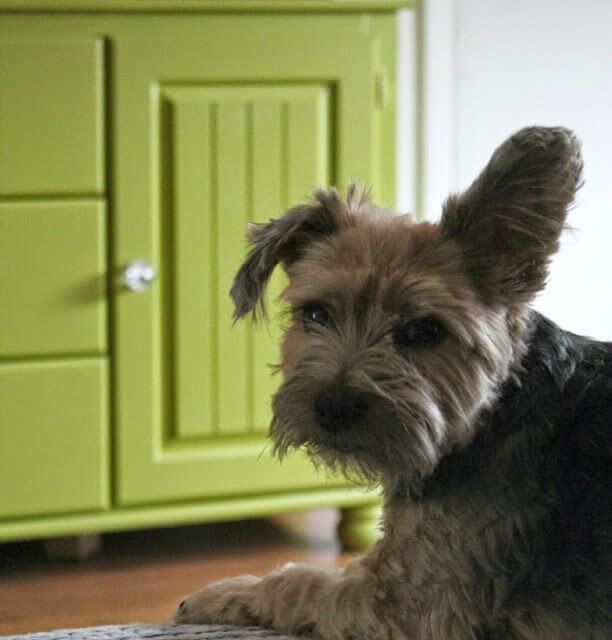 The Fear In Me Mounts:

I’m crying by this time, because I know there is something seriously wrong. So I rush over to the computer and do a search for “my dog can’t close her mouth.” And came up with all sorts of reasons: drop jaw, etc.

I thought: “Oh my God, how is she going to drink water till morning when I will rush her to the vet?”

I come back to find she had coughed up the object in her throat.

Her mouth was now closed. A big (or it sure seemed big at the time) piece of blue chewed up plastic dog toy is in front of her. She is staring at me. Apparently she coughed it up while I was in the kitchen.

I was so relieved I about sank down to the floor.

These are the culprit. Not only her favorite toy. But the only one she will have anything to do with. You can see I took them away from her for the night. 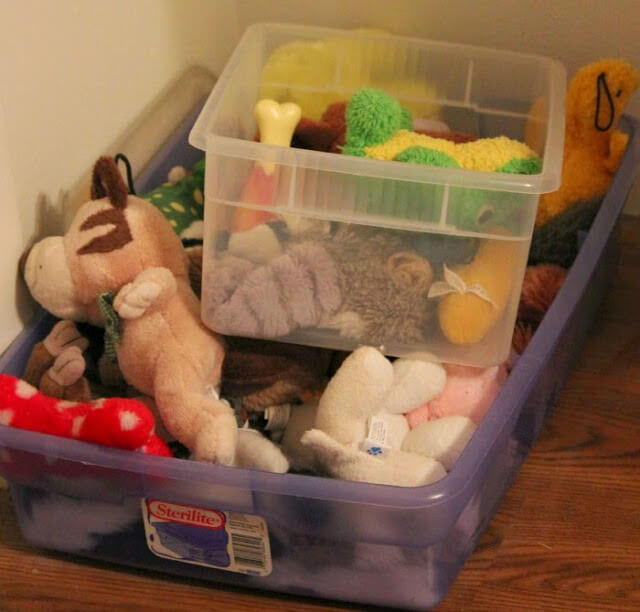 Here is their bins of toys of all varieties. Chew toys, stuffed animals (which are Charlie’s favorites.) So it’s not as though these dogs don’t have toys. 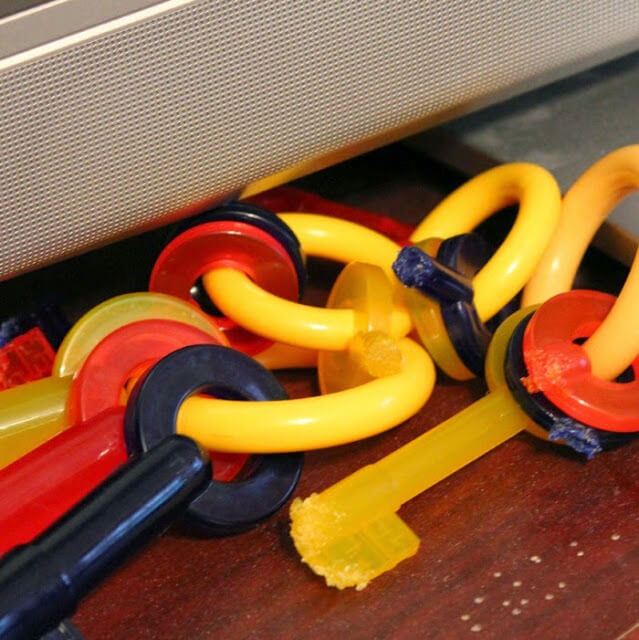 You can see the navy blue key toward the top that she has chewed on.

She has loved these keys since she was a puppy. Every few months I have to go to Petsmart and buy a couple of new ones, to the tune of about $9 a piece. 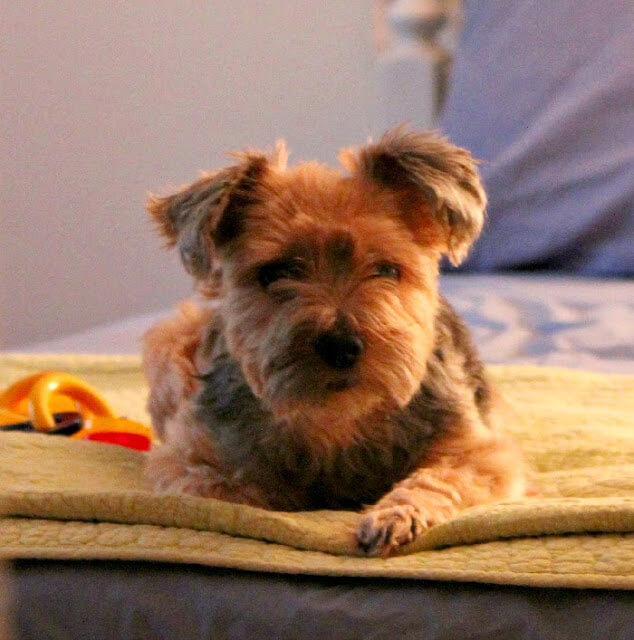 Abi is a chewer. She will hunker down after the lights are out and Charlie is snoozing next to her. Then I can hear her chewing like a fiend on her keys. Finally she will wear herself out and go to sleep.

I have tried every chewable dog toy I can find. She doesn’t care for them.

Charlie has never been a chewer. Hence he had to have 10 teeth taken out last fall. If you don’t use it, you lose it. 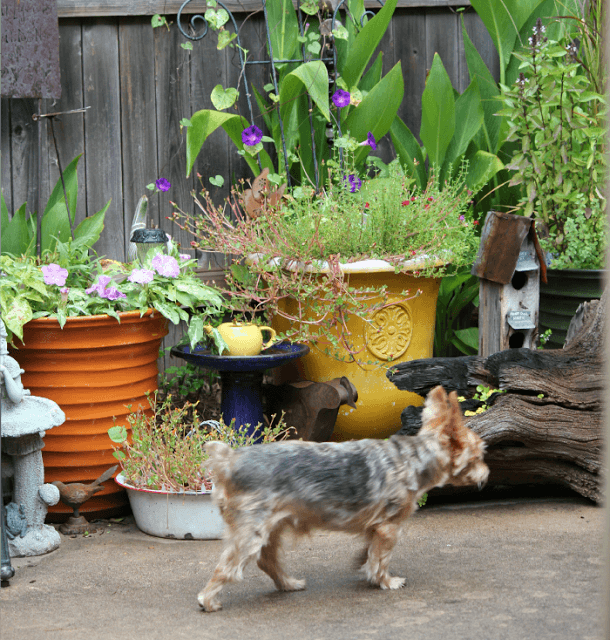 By the way, Charlie Ross turned 8 yesterday. Abi’s birthday was just before his. She turned eight last month.

Say hi Charlie Ross! He’s a bit shy, the very opposite of his sister. Tell them you were the birthday boy yesterday. 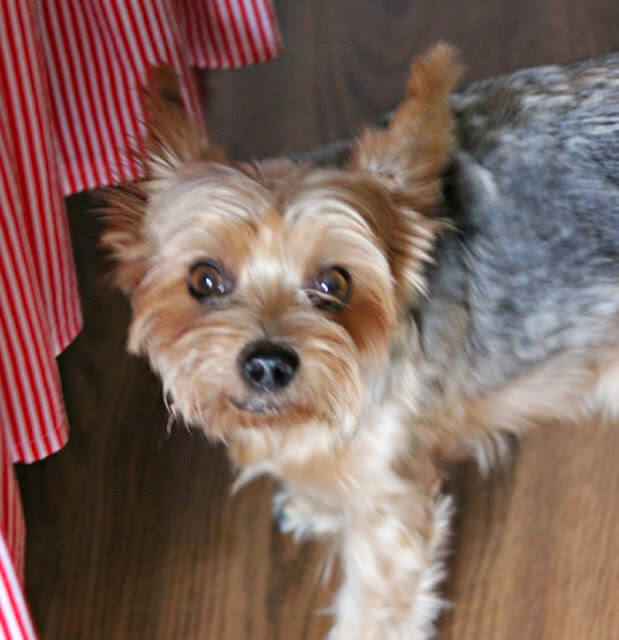 So the crisis was averted. I laid awake awhile trying to get myself to calm down from the scare.

Meanwhile, as I’m writing this, here are the pupsters. They can be fighting at one minute. And the next they are like this in one of the dog beds next to this computer.

I do love these little pupsters! 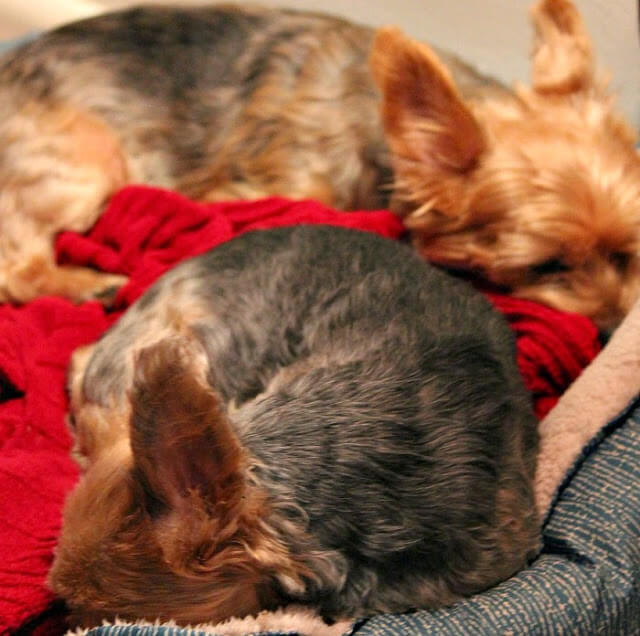 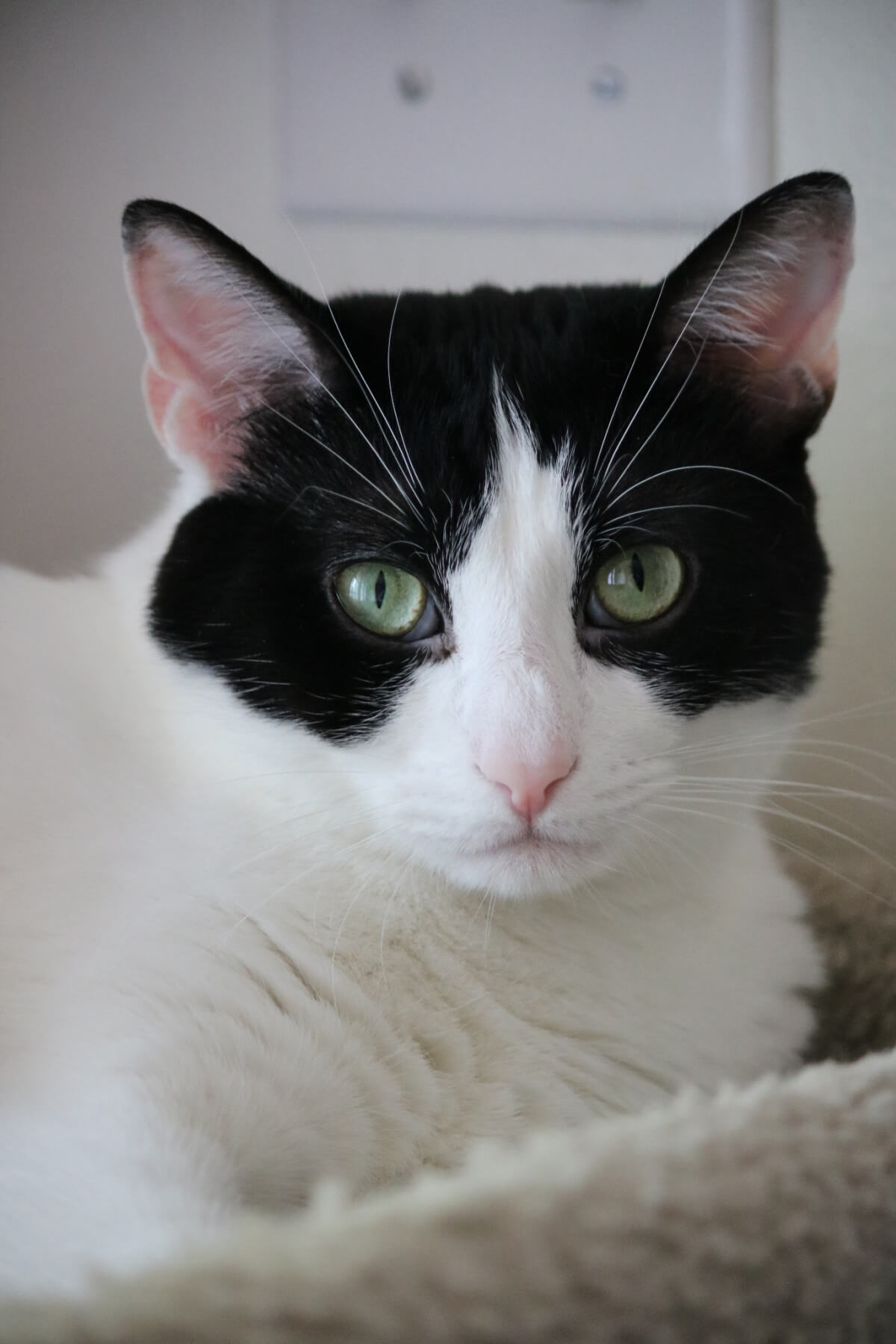 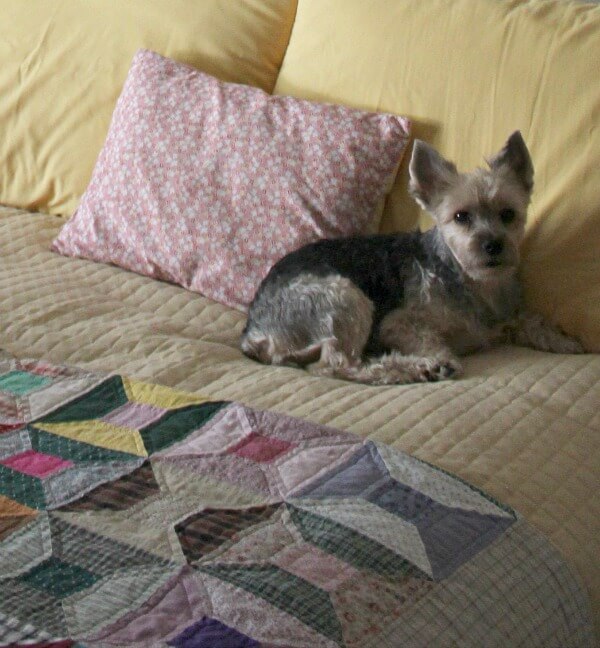 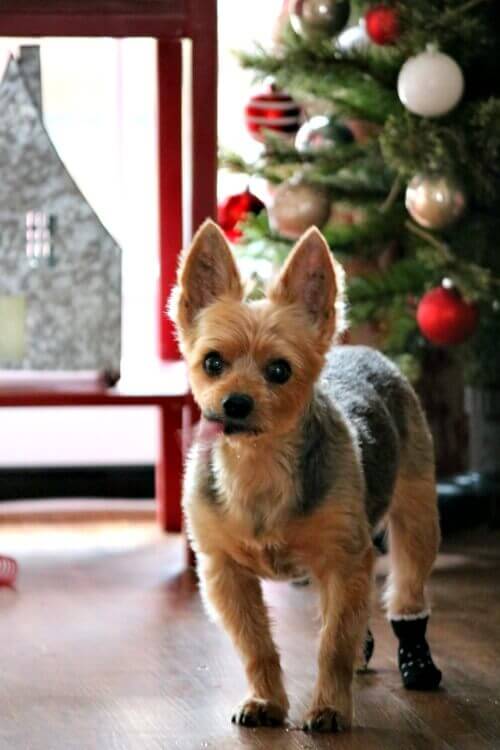 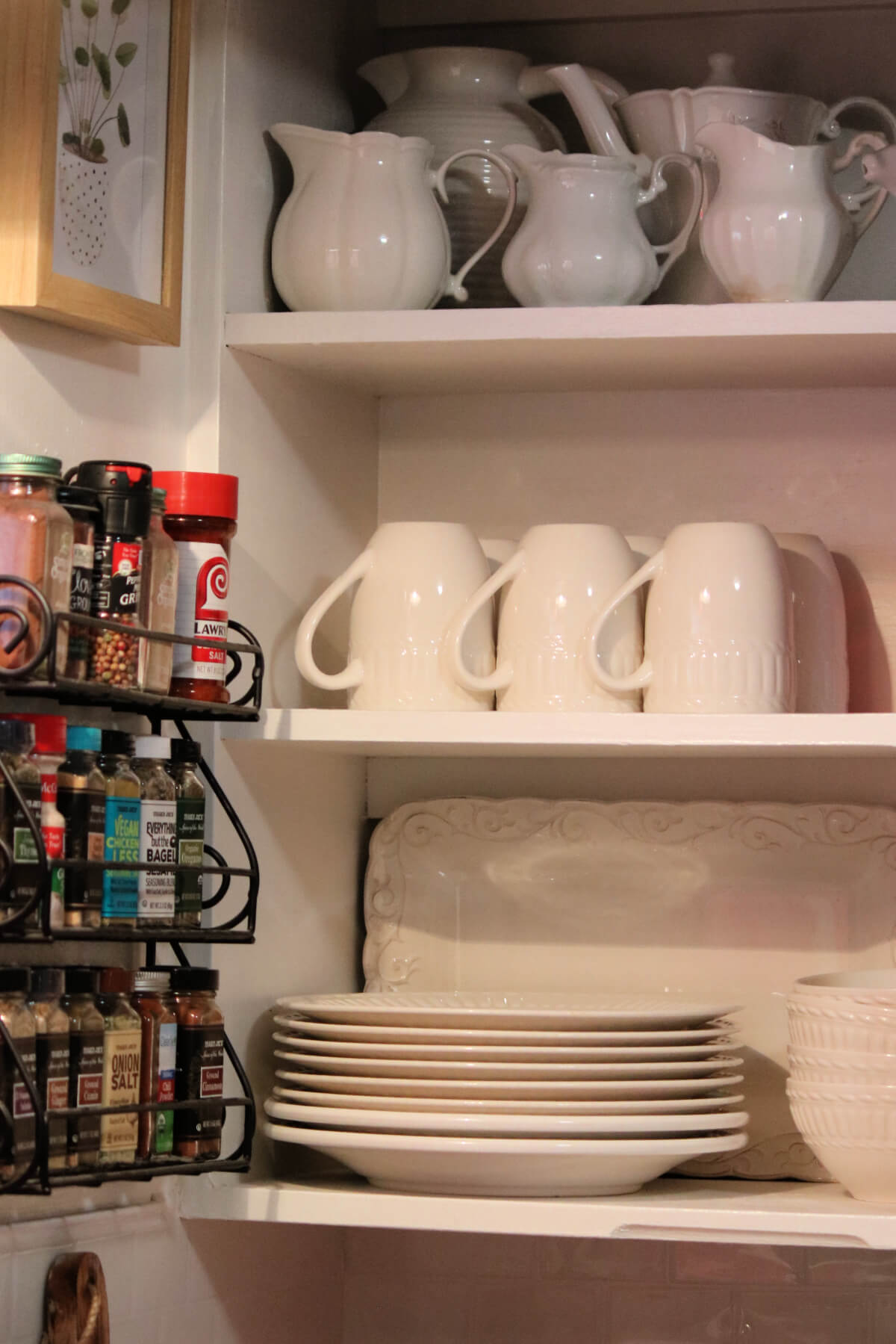 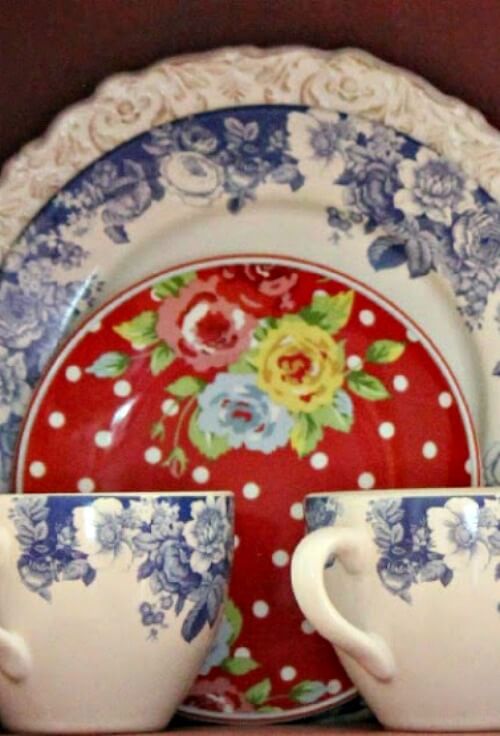